A principle we try to emphasize often is "success equals effort over time." To be successful we need to work really hard and stand the test of time. Some call this "grit". Legendary coach John Wooden used the term "industriousness". South Titan Basketball just completed another season of Up! This is our advanced conditioning program preparing us for the upcoming season. Coach Pohlmann is an expert in this field and leads the charge for 12 sessions. This year we had 8 student-
175 views 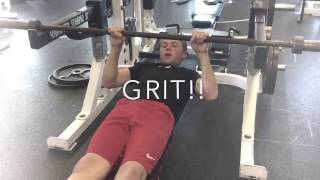 Five weeks done. One to go! Often we will remind our team "success equals effort over time". This equation (S=E/T) is not anything magical, but simply grit! In basketball, in sports, in life; those that persevere have a much greater chance of becoming the best that they can possibly become. So you might be wondering, who has stood the test of time with UP this year? Here are our leaders listed in alphabetical order: Perfect +Bonus Attendance Abakar Cordes Dol Hill Real Robert
66 views 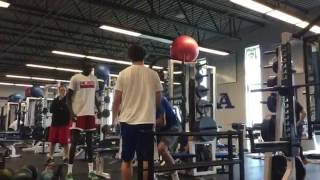 We just completed our 3rd day of UP16 -- a six week, 12 session strength and conditioning program under the leadership of head strength coach Kurt Polhmann. This is an amazing opportunity for individual players to improve their athleticism and mental toughness. We are very blessed to have Coach Pohlmann on staff. He is top-notch and anywhere else you would have to pay top dollar for his expertise. Let the grind begin... #up #grit #grind #ask
101 views
Coach Hueser

Don't give up. Don't ever give up!

At the 1993 ESPY's, the late Jim Valvano is famous for saying, "Don't give up. Don't ever give up!" It was during this speech that Valvano stressed the importance of hope, love and persistence. He was diagnosed with cancer in June of 1992. My good friend and legendary Ravenna High School basketball coach, Paul Beranek, just finished up three months of chemotherapy. This has been the second time he has had to battle this dreadful disease. However, his positive attitude and res
8 views
Coach Hueser

​ Grit. Grind. Toughness. These words are always associcated with defense. If they become who you are on the floor, it will be hard for your coach to take you off. Just what is Grit, you ask? It's a look in your eye. A tension in your stance. A bounce in your step. Grind? It's never giving up. It's sprinting the floor. It's finishing every possession. And Toughness? Defelections. Floor burns. Charges. I've often wondered if playing with these qualities is a skill that can be
2 views
Coach Hueser

Author Jon Gordon tweeted out, "The #1 predictor of success...Grit! The ability to persevere, overcome and move forward in spite of challenges, failures and obstacles." I can't agree more! This motivational video titled "Why Do We Fall" shares a like-minded message. It will be worth your six minutes to watch if you enjoy famous quotes and inspirational movies. (I believe there is one curse word at the 3:58 mark.) Take a break, sit back, be inspired and then get back to work!
10 views